Get Top Cash for Your Jewelry and Coins! 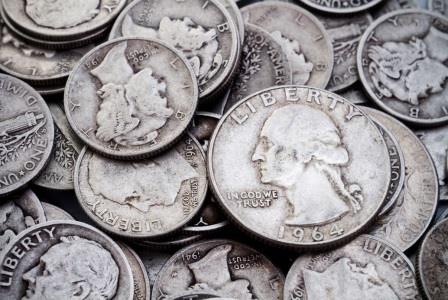 Before 1965 all major U.S. coins, excluding the nickel and penny, contained 90% silver content. When a coin is called “90% silver” it is a short way of referring to pre-1965 dimes, quarters, half dollars, and dollar coins, as a group. The term also serves to differentiate these coins from post 1964 coinage.

“Junk Silver” is a term many people use to describe U.S. 90% silver coins. All of America's dimes, quarters, and half dollar coins minted before 1965 were made of 90% Silver. Junk Silver has no numismatic or collectible value above the bullion value of the silver contained in the coin. Such coins are popular among people seeking to invest in small amounts of silver. They are referred to as “junk Silver” because their value is solely based in their metal content with no consideration of collectability or condition.

Here is a list of 90% silver coins that you are most likely to see:

The vast majority of coins in the above list are considered Junk Silver, as they do not have any collectible value.